Make Your Own Fishing Adventures 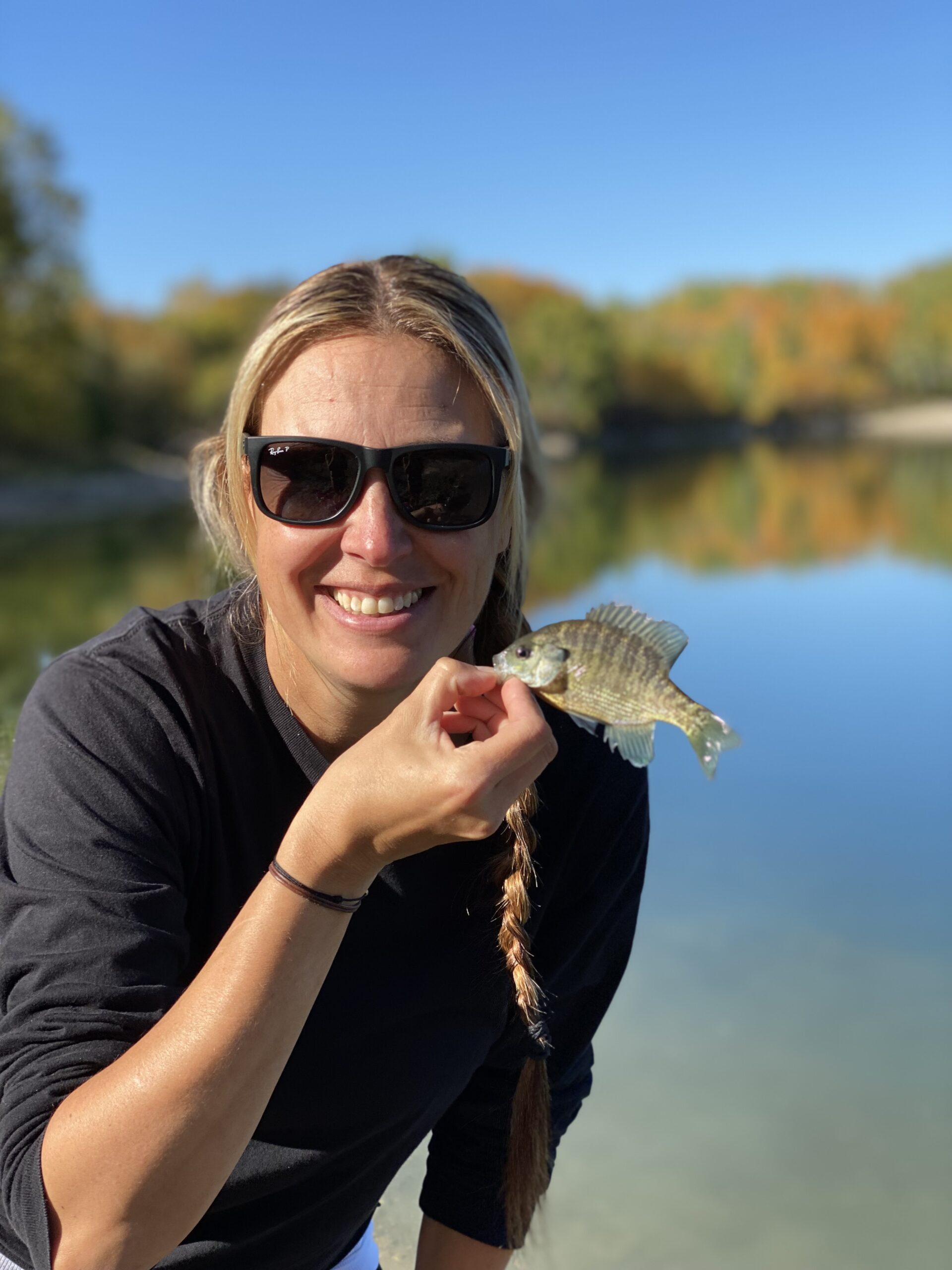 Sometimes the best fishing spots are the ones we never plan on going to and just kind of end up there. That’s exactly what happened to us while in Manitoba this past September!

My son had his heart set on going to a certain lake and after lots of research (because that is what we like to do) and reading other Anglers comments, we found one Angler that was upset about not catching any fish at this lake and gave away a hidden gem! We decided to switch up our plans and check out this water body that this Angler talked so highly about and boy am I ever happy we did.

Reynolds ponds and Lafarge Pits are located approximately 75km east of Winnipeg and just north of the town Richer. With turquoise blue water and over 20 ponds ranging in all sorts of sizes this is truly an Anglers paradise!! You can find Largemouth Bass, Smallmouth Bass, Rock Bass, Brown Trout, Tiger Trout, Rainbow Trout, Brook Trout, Yellow Perch, Sucker and Bluegill. The road going in is not a maintained road but once you navigate the big pot holes it is definitely worth your while. Trying to choose which pond to fish out of was the hardest part since they all have fish.

The first pond we stopped at had Brown Trout, we could actually see them swimming around and surfacing but they just didn’t want what we had to offer so after trying to catch them for a bit we decided it was maybe better to move on on to the next pond and try our luck there. We did however get my Mom out fishing, who has never fished before, so that was a lot of fun being able to teach her what I love so much. 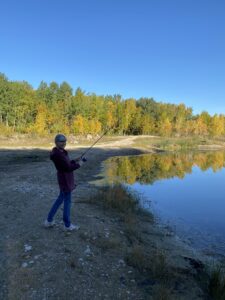 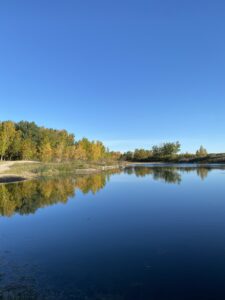 The next pond had Bluegill as well as Brown Trout from what we could see. The waters are so crystal clear you can really see everything swimming around you, it was almost like being at an aquarium. We managed to catch 17 Bluegill in one hour, those guys may be small but they sure put up a fight and are fun to catch. We also found out from another Angler fishing near by that there are also Rock Bass in the pond but we never ended up catching any of them. This pond is a popular place where people come and set up camp for the night after a day of fishing. This was one of the bigger ponds so there was lots of room to explore and fish without getting into anyone’s way. None of the ponds have names so you just kind of go off what other Anglers tell you and just hope for the best. This was my first time catching a Bluegill and sure had fun doing so, Bluegill have always been on my bucket list of species to catch. With the water being so clear we had a lot of fun watching them in their school and trying to guess who would be the greedy one and take the bait! 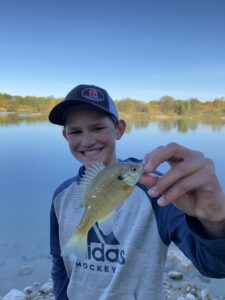 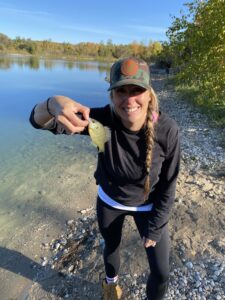 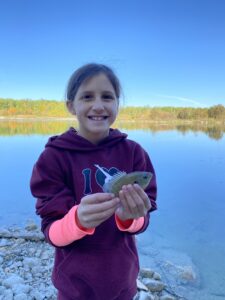 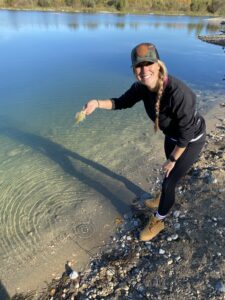 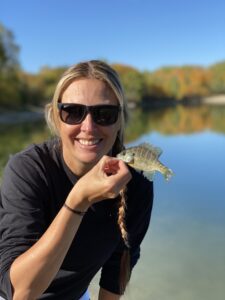 How To Identify A Bluegill

Bluegill are part of the Sunfish family and because of that they have short compressed bodies.Their colours can range from dark blue to blueish purple to yellow and  and in some cases clear and colourless. Bluegill will usually have 6-8 vertical bars on their side which may or may not be prominent, this depends on the age, location and water condition of the fish. Bluegill will generally have a round black spot on each side, this will be located at the base of the dorsal fins near the edge of the gill. A significant indicator of a blue gill is often a pronounced yellow breast or abdomen. This colour may be more orange in a breeding male.

Bluegill prefer clear water with some weed growth, and warmer lakes and ponds. These small fish form large schools in shallow water near the shelter of weeds, docks, bridges or any other cover they can find. The bigger Bluegill tend to stay by themselves, sometimes in a small group. This is exactly how the Bluegill were when we were fishing for them, clear warm water, a large school and right beside a weed bed. It was a lot of fun watching them investigate the lure and seeing which one would take the bait. We have never fished in such clear and shallow water before, living in the North near the Rockies our lakes get deep fast. It was really cool to be able to see the fish just doing their thing in their natural habitat

What Bait To Use

You should use baits that you can present quietly to avoid spooking the fish since Bluegill can spook quite easily. Popular flies include various sizes of Woolly Worms, Woolly Buggers and Bead Head Nymphs. The best live baits include worms, crickets or grasshoppers set 1-3 feet  below a tiny bobber. Remember to think small when fishing for Bluegill. A number 12 hook or smaller should be large enough for your bait since Bluegill have such small mouths.

We had a lot of success with True North Baits 1″ ‘Lil swimmers, 1.1″ and 1.3″ Waxies from their Micro Series pack. This pack includes a random assortment of their epic standard and custom colours. They are made of super soft plastic and scent impregnated and at $3.99 for a pack of 30 you really can’t go wrong! We caught all our Bluegill on these lures and they absolutely drove the fish crazy. True North Baits is a family owned and operated business that specializes in creating superior quality Canadian fishing lures. They also happen to be one of the Women’s Fishing Networks amazing sponsors! I honestly can not speak highly enough about this company and you should definitely go check out their products, you will not be disappointed.  Remember, you can save 10% when ordering from their website https://truenorthbaits.com by entering the Promo Code: WFNetwork 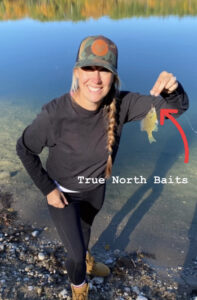 We tried another pond near by that was a Trout pond, but were unsuccessful there. We were also hitting noon and it was a rather hot one that day especially for the middle of September. When temperatures get too high not only will Trout become lethargic and stop eating but they will go down deeper to colder water.

Our last spot was Lafarge Pits, this is the biggest of all the ponds out there. This one is stocked every spring by Manitoba Conservation with Tiger Trout, however there are many other species in there. The water here is so blue, but with it being the biggest and deepest the water was much colder then the other ponds. With the water being so clear you could actually see the fish chasing your lure as you were reeling in. We did manage to catch a Smallmouth Bass here which was also a new species we have never caught before! 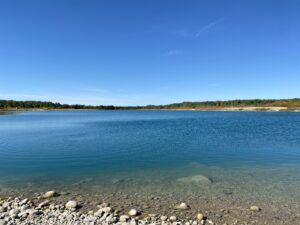 At the end of the day we had had so much fun checking out a new spot that was never on our list. We may not of been able to research this place like we usually do when we go fishing but sometimes you just have to take that risk. A great fishing adventure is truly defined by you. We had no idea what this spot would bring but what an adventure it was!

Make Your Own Fishing Adventures