Sometimes, the last minute planned fishing trips end up being the best ones. I experienced this last Sunday. I still consider myself a beginner Angler and prefer to go with friends that are willing to teach me skills and know what they’re doing because I have SO much more to learn about fishing.

My very knowledgeable fishing buddy, Mitch, invited me to go ice fishing at Buffalo Lake, about an hour away from us. We managed to make our schedules line up for a couple hours and we headed out mid-afternoon, which meant we would only have about 3 hours of daylight. It was one of the coldest days of winter so far, so we packed the tent, propane heater and the auger. Unfortunately, no sled to pull everything on the ice.

On the drive, I asked Mitch why it was safe for us to go on this lake now but not other big ones. He shared that this particular lake is really shallow so the ice freezes a lot quicker. I later researched this lake and learned that it has a max depth of 21 ft (6.5m) and an average depth of 9.2 ft. The two species of fish in the lake are Burbot and Northern Pike.

We get to the lake and haul our gear to a spot we had success at the previous winter. We each had to do a couple trips to haul our stuff to the spot. The very first thing Mitch likes to do is drill the holes. He started the auger up and started drilling a hole. He drilled for a couple minutes and the auger would just not break through the ice. After a few minutes, he gave up and we realized the blades were dull. It was the first time using the auger this season. We thought that there was no way we could not ice fish so I wandered over to the other ice fishing tents that were out and inquired if we could borrow an auger. Surprisingly, no one had an auger. One gentleman was kind enough to share his ice pick. He chipped us a giant hole which made me really nervous because it was big enough I felt like I could fall in and if you have ever tuned into my segments, you know I can sometimes be clumsy. We chipped a few other smaller holes so we could have two rods outside of the tent, and each be jigging inside the tent in our giant hole. 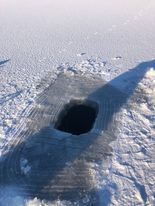 It was a really chilly day and our faces were cold from the brisk cold so we quickly set up the tent and heater. Mitch was kind enough to rig up all the rods and let me watch so I could learn because we had to switch all of our gear up from our previous trout trip as Pike and Burbot can get quite big. We used jig heads with anchovies and I started jigging right away. Within about 5 minutes of jigging, I hooked into a Pike. We were only fishing in about 4-5 ft of water so it did not take long to reel it in. The coolest thing ever about having the massive ice picked hole, was sight fishing the fish, watching them swim up and bite the bait. It was seriously so cool. Mitch came into the tent and was so impressed I landed a fish within a few minutes. I grab the pike, which could have been my personal best, and I brought it outside the tent to snap a picture. I was so proud. Since, we were fishing in such shallow water, the fish was not tired, so it was really wiggly and and full of energy. I was full of adrenaline and excitement, landing my first Pike of the ice fishing season, so of course, when he started wiggling, I held on as tight as I could because I did not want to drop him on the ice. He ended up wiggling so hard that I ended up hugging him and getting the infamous fish slime all over my snowsuit. He wiggled even more as I held on and he slipped over my shoulder, went through the tent door, and back down into our huge hole. There was no picture to be had, but there sure were a lot of laughs to be had and at least I had Mitch as a witness. We laughed about it and I quickly set my rod back up hoping more fish would bite.

Mitch and I were sitting in the tent warming up, and I was jigging when he watched a Pike come up to my bait from one corner, and I watched a Burbot swim up from the opposite corner. The Pike ended up getting spooked and darted off. The Burbot had a massive head I was so nervous I was going to lose him. BUT, I didn’t. He grabbed my bait and I hauled him up quickly and we were both amazed at how big he was. We were extra careful to be sure not to lose him down the hole like my Pike. One thing about fishing buddies is they get just as excited when they get to witness a fish being reeled in and I was so proud that Mitch joined in on my excitement and he was really proud of me. I was happy because Mitch is usually the “fish slayer”, but that day, I was able to claim that title. We snapped a few pictures and we decided to keep him and plan a fish fry, because Burbot are known to be a “poor man’s lobster”, and I have never tasted one before. We are currently planning a fish fry so I can finally experience the infamous taste of Burbot. 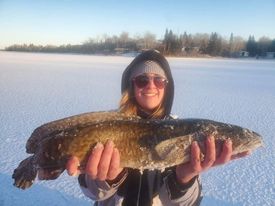 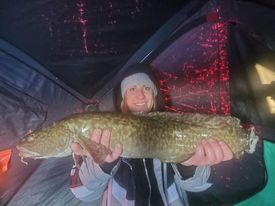 We each ended up catching a few more Pike that day and had a ton of fun. When it started to get dark and colder, we decided to call it a day and started to pack up to head home, since we had such a successful day. If it wasn’t as successful, we probably would have stayed into the dark longer trying harder to land some fish. I actually did not end up measuring how long the Burbot was, but I know it was my personal best because I have only caught a few in my lifetime. 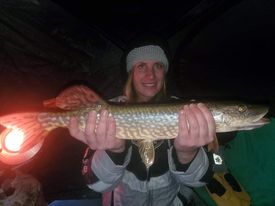 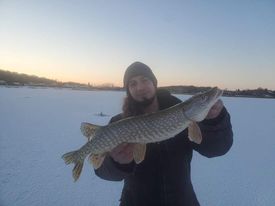 Special thank you to my friend Mitch for being a great fishing buddy and helping me along the way, stay tuned to hear what my thoughts are about the Burbot Fish Fry!!!

Manage Cookie Consent
To provide the best experiences, we use technologies like cookies to store and/or access device information. Consenting to these technologies will allow us to process data such as browsing behaviour or unique IDs on this site. Not consenting or withdrawing consent, may adversely affect certain features and functions.
Manage options Manage services Manage vendors Read more about these purposes
View preferences
{title} {title} {title}