FINALLY landed the Brown Trout I have been after!

I thought I would do my first ever blog entry after a pretty special fishing trip this past September long weekend. If you have been following my fishing journey, you would know I have been after a river brown trout for a little while now. I have caught brown trout before, but I just think they are such a beautiful fish and I was itching to catch one. Once I have a certain fish in mind I want to catch, I can’t let it go. I am determined to catch it, no matter how many tries it takes me. Although I may not catch a lot of fish, I hope that my determination inspires other women to get out fishing, and of course, laugh with me during all my trial and errors along the way.

For some reason, I have repeatedly been told, by numerous people, “that’s why it’s called fishing, and not catching.” LOL. I must say, I have to agree with this statement. And sometimes, the best part of fishing, is the not catching part, and rather enjoying good company, nature, fresh air, all that good stuff, and most importantly, connecting with yourself.

What do I mean “connecting with yourself.”? Fishing is about escaping reality and enjoying no other worries in the world except to catch a fish, and if you don’t end up catching one, you end up having some memorable moments and a lot of time do self reflection and thinking.

In my latest segment, after catching my brown trout, I Literally say “This was the best day of my summer.” It’s an amazing feeling to accomplish something you’ve worked so hard for, and catching it on film, is a wonderful bonus. I think our viewers really appreciate the joy that fishing brings me. It’s pure happiness when I catch a fish. In this moment, I had my son net my fish for me and it was such a cool moment to see how proud of me he was and be a part of the joy that fishing brings me.

There are just some fish that stand out more than others that I catch because they have experiences and emotions attached to them. I actually have a “fish wall” at home, and every time I have a special fish moment, the photo goes up on the wall.

This brown trout will definitely be going on the “fish wall”. 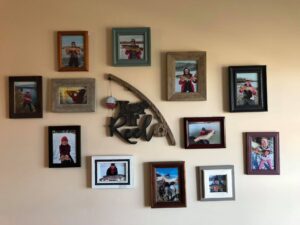 I actually caught a beautiful brown trout earlier in the summer, and I thought that was the fish I was after. As I was holding the fish for a picture, it wiggled out of my hands back into the water and there was no picture to be had. It was a beautiful brown trout with a lot of beige on it and I was so sad that I lost it. I was disappointed with myself that I didn’t hold on to it good enough. Sometimes my excitement takes over and everything I have learned about fishing goes right out the window.

If there’s one thing, I’ve learned along my fishing adventures, it would be “it is what it is.” You can’t change what happened, no matter how disappointing it is, especially losing an amazing fish, you can only learn and do better next time. Which brings me to the last portion of this blog post; the picture of me with my brown trout. I have an intense grip on the fish and I didn’t care about my pose, how I looked (I had been camping in a tent for 2 nights prior to this) or the background, I just needed a picture. Because I had previously lost a beauty brown, I was determined not to lose this one, and get that picture I wanted so badly. So please ignore my massive hands covering a lot of the fish. Now that you’ve heard the story behind it, I hope you can feel the special moment behind this picture and my journey to catch this beautiful river brown trout. 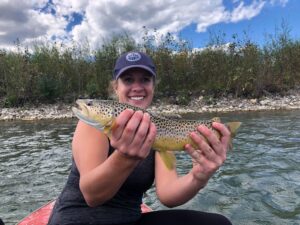 My friend Tyler witnessed me struggle to land the perfect brown I wanted and ended up being just as determined as I was to see me land one. This is what true fishing buddies are. After I landed my trout and we talked about what a great moment it was, Tyler said, “That sure was perseverance.” I googled the meaning of perseverance and it stated it is; “persistence in doing something despite difficulty or delay in achieving success.”

This may seem like a regular old brown trout to some, but as stated above, some fish have a special connection to me and this was one of them. Moments like these, are why fishing is important to me and brings so much joy into my life.

Now, to try and decide on what last fish I would like to target on the open water before Ice fishing season is among us?!

FINALLY landed the Brown Trout I have been after!

Manage Cookie Consent
To provide the best experiences, we use technologies like cookies to store and/or access device information. Consenting to these technologies will allow us to process data such as browsing behaviour or unique IDs on this site. Not consenting or withdrawing consent, may adversely affect certain features and functions.
Manage options Manage services Manage vendors Read more about these purposes
View preferences
{title} {title} {title}